On Thursday, Oct. 6, Sequential Art Gallery + Studio will feature comics and illustrations by cartoonist Mike Russell — including the debut of a new short story written by Erik Henriksen and illustrated by Russell with frequent collaborator Bill Mudron. 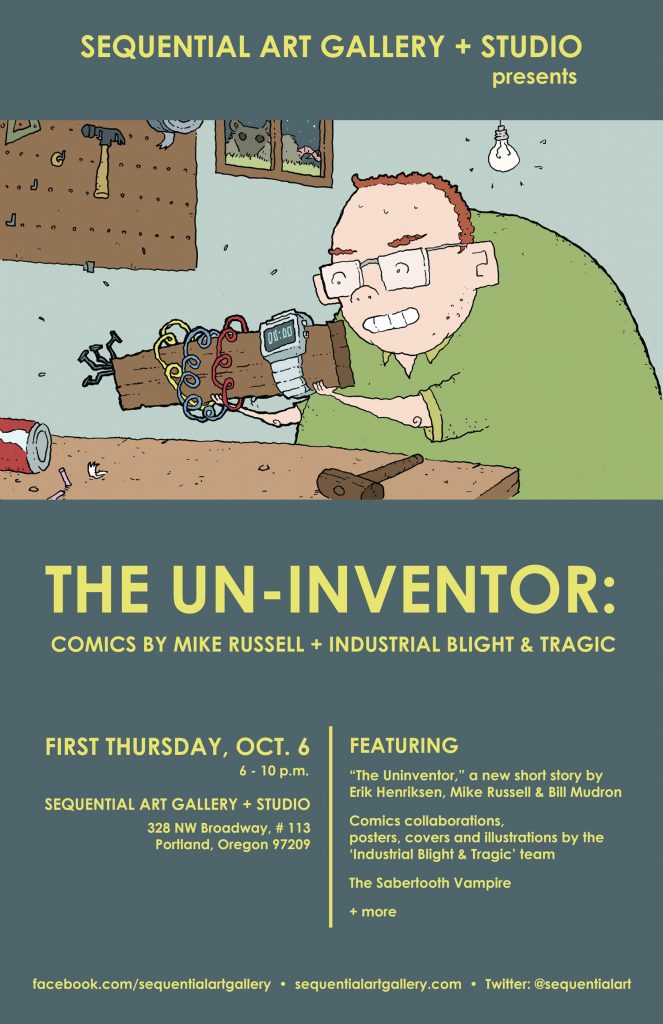 • “The Un-Inventor” — a new short story written by Erik Henriksen, penciled and lettered by Mike Russell and inked and colored by Bill Mudron. Henriksen’s script tells the story of a chaser of patents who brutally simplifies his life with his newest creation. Copies of the full-color, limited-run comic will be available for sale at the show.

• Wall-sized displays will also reveal the work that went into two of Russell’s non-fiction comics collaborations — including an episode of “CulturePulp,” Russell’s 2004-12 comic strip for The Oregonian, as well as a four-page memoir strip written by Sarah Sprague for Birth.Movies.Death magazine that recounts the month Sprague spent in line waiting for “The Phantom Menace” in L.A. in 1999. Each wall-sized display will reveal photo-reference and Russell and Mudron’s not-entirely-serious working method.

• Also on hand: one-off prints, collaborations, posters, covers and illustrations by “Industrial Blight & Tragic” — the joke “studio” name Russell and Mudron have used when working on comics together over the past decade, occasionally bringing in additional collaborators including local comics artist Adrian Wallace.

• The show will also feature original pages from Russell’s webcomic “The Sabertooth Vampire.”

Mike Russell is a writer and cartoonist living in Portland. His comics projects (many of them collaborations) include “The Sabertooth Vampire,” “The Uninventor” “CulturePulp,” “Mr. Do & Mr. Don’t,” “Opera, Drawn Quickly,” “Jaxxon’s 11,” “Augie, The Littlest Reaver,” “Serenity Tales,” “Santa’s Lil’ Gimp,” “Take My Love,” and several educational comics (most recently “Clusters and Your Economy: An Illustrated Introduction.”) He’s also created beer labels, an album cover and a comics-convention identity system.

His writing, interviews and/or comics have appeared in Dark Horse Presents, The Oregonian, The Wall Street Journal, The Los Angeles Times, The Boston Globe, Willamette Week, The Portland Mercury, In Focus Magazine, The DVD Journal, Bookslut, and other publications.

[UPDATE 10-6-2016] Thank you to Stuart Tomlinson of KATU News for visiting with artist Mike Russell and curator Kaebel Hashitani at Sequential Art Gallery in the week leading up to the opening reception! You can watch the video and read their summary of the show over here: Cartoonist Mike Russell’s First Thursday gallery show is a collaborative effort.