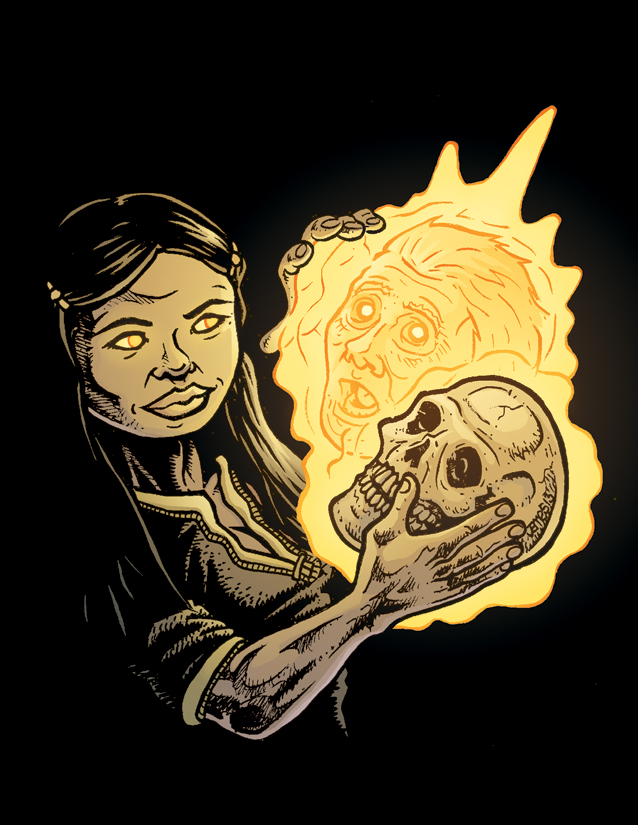 Sequential Art Gallery presents “OF FOLKLORE AND FAIRYTALES”, an exhibit of James Sinclair’s artwork from local independent comic series, “La Brujeria”. The exhibit focuses on Sinclair’s skill at blending the mundane with the fantastic, all while combining the distinct visual style of two cultures that never met until the age of exploration and conquest. The exhibit opens this Thursday, October 3rd, with the artist’s reception from 6pm to 10pm.

Written by Aaron Duran and set in Portland, Oregon, “La Brujeria ” is the story of Althalia Cabrera, the last Bruja — a descendant of Mayan witches with the power to control and command the dead. Typical of most modern Portlanders, she wants to hold down a job with a steady paycheck and decent health benefits. But when she accepts a position at the Golden Bought Pawn Shop, her life becomes anything but typical — with Werewolves, Elementals, and a diminutive Chupacabra as co-workers. Eventually, Althalia finally finds some semblance of balance between her supernatural gifts and the best job ever . But as ancient forces and even older grudges resurface , the scales of power again shift for the Bruja; Althalia and the rest of the world may never be the same.

After studying Fine Art at the Pacific Northwest College of Art , Sinclair dived headlong into comics. His first job was as a comic book colorist, working for many years on such titles like “Hellboy ” (Dark Horse Comics) and “The Flash ” (DC Comics). However, he never forgot his true passion — creating his own original art. Knowing that the transition would not be easy, Sinclair has spent the last few years working underground on material to refine his work. “La Brujeria” is his first work as the primary artist. His pages expertly depict the wonderfully weird characters against the familiar backdrop of downtown Portland. S inclair has also created art for “Curse of the Emperor’s Stone “, an RPG adventure from Acacia Games.

“OF FOLKLORE AND FAIRYTALES” will be on display throughout the month of October, with gallery hours on Thursdays from 3pm-7pm, Saturdays from 11am-5pm, and by appointment. The exhibit will close at the end of business on Thursday, October 31st.