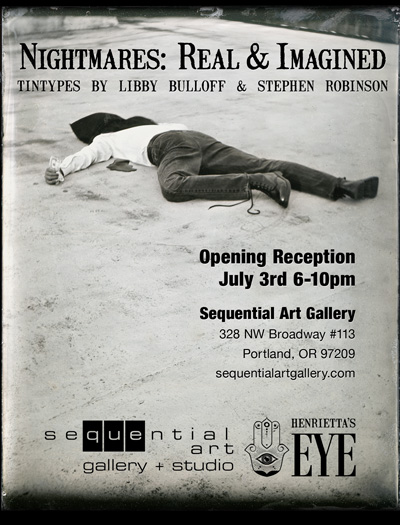 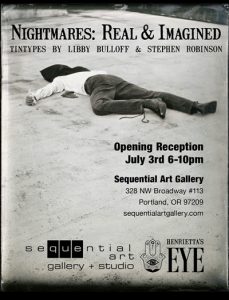 Using the medium of wet plate collodion on aluminum – commonly known as tintype photography – Bulloff and Robinson have created a series vignettes to investigate the horrific and humorous imagery found in nightmares. Drawing inspiration from the collective unconscious, the photographs contain familiar themes – fear, loss, death, pain – with the intent to evoke emotional response from the viewers, thus making their reaction a part of the installation.

Bulloff is a self-taught internationally exhibited photographer, designer, and editor. Her brightly colored portraits and food photographs have been published in numerous books and magazines. She recently finished an exhibition of retrofuturism at the Museum of Ideas and Innovations in Barcelona, Spain. Libby is a member of the ’57 Biscayne artist collective in Seattle, WA.

Robinson is a UI designer, metal fabricator and tintypist. Previously a graphic designer working for newspapers and non-profits, he moved to Seattle to put his designer’s eye and hands to work restoring vintage European and Italian cars, culminating in the rebuild of a 1965 Alfa Romeo which won the 2010 six-day Pan-America race in Mexico.

The “Nightmares Real & Imagined” exhibit will be on display throughout the month of July, with gallery hours on Thursdays from 3pm-7pm, Saturdays from 11am-5pm, and by appointment. “Nightmares…” will close at the end of business on Saturday, July 27th. 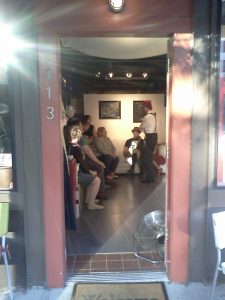