Sequential Art Gallery is proud to introduce Jay Reynolds in his first solo exhibition, featuring his work from the in-development board game “Little Pig”, as well as a variety of sequential art and personal projects. The exhibition opens this Thursday, April 7th, with an artist’s reception from 6pm to 10pm. 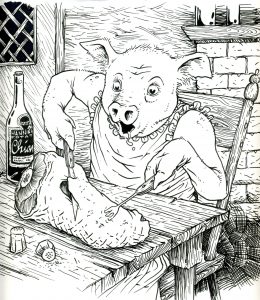 “Little Pig” is the creation of Weird City Games, creator and publisher of “March of the Ants” board game. Drawing from the wealth of well-loved nursery rhymes, Reynolds produced illustrations of both characters and scenarios for the project, filled with both detail and whimsy. Weird City Games then used Reynold’s work in the promotion of its Kickstarter campaign. While the campaign didn’t meet its funding goal, both Reynolds and Weird City Games hope to raise awareness for the game while examining how best to proceed. In addition to “Little Pig” illustrations, Reynolds’ is exhibiting work that speaks to several of his passions, including comic books, tabletop games, science fiction, and fantasy to name a few.

Predominately self-taught, with a foundation of college-level art classes, the 39-year-old Reynolds admittedly doesn’t think of himself as a “good artist.” While this all too common feeling afflicts nearly every artist at some point in their lives, Reynolds has continued to produce work in spite of this, whether it be for retail establishments, contract illustration, or fan-based personal art. When he’s not creating art, Reynolds indulges in various tabletop games, and dotes on his two cats.

Reynolds’ exhibit will be up throughout the month of April, with gallery hours on Mondays from 2pm-6pm, Saturdays from 11am-5pm, and by appointment. The exhibit will close at the end of business on Saturday, April 30th.

Sequential Art Gallery + Studio is located in Old Town Chinatown at Everett Station Lofts, 328 NW Broadway #113. The gallery showcases local artists who explore the concept of sequential art, which is loosely defined as using consecutive images to tell a story. Curated by Kaebel JK Hashitani and Merrick Monroe, and aided by Rich Mackin and Andrew Paris. Open for regular viewing hours on Mondays (2pm-6pm), Saturdays (11am-5pm), and by appointment.