Sequential Art Gallery presents “GIRLFIEND”, a new digital art installation by the PANDER BROTHERS. Join Portland’s sibling creative duo for a multimedia presentation of their creative process and behind-the-scenes look at their latest graphic novel, “Girlfiend”, and watch the creation of limited-edition prints by Jacob and Arnold Pander, screen-captured on the Cintiq digital tablet for projection that evening and available to purchase on the gallery walls. The brothers will also be on hand to sign copies of “Girlfiend” that will be available at the event! The exhibit opens this Thursday, May 7th, with the artist’s reception from 6pm to 10pm. 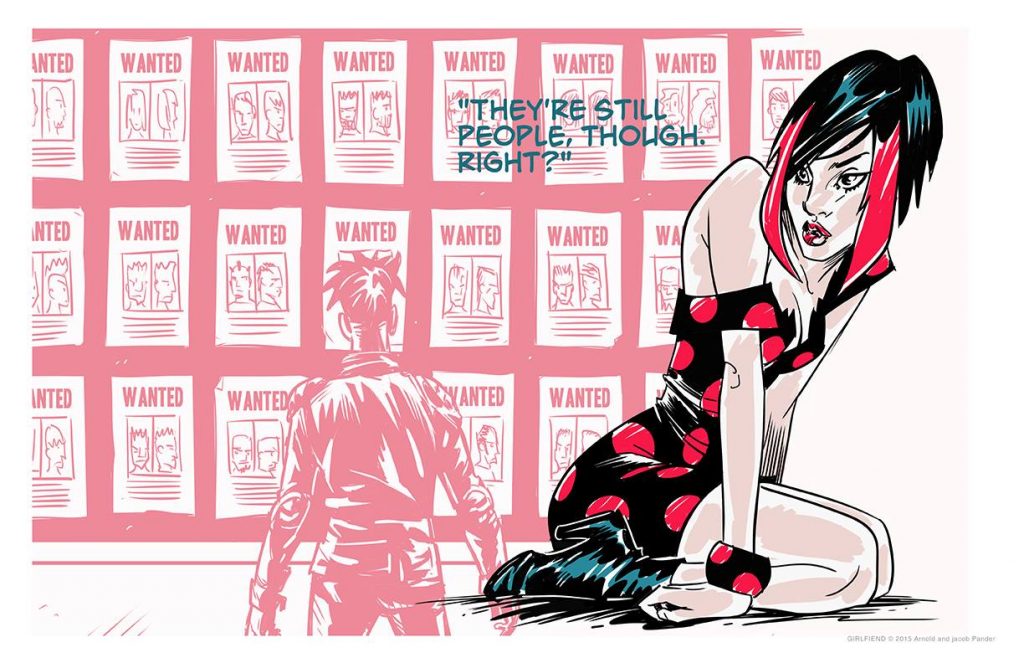 After a decade away from the comics medium to pursue film and mediaprojects, Portland’s Pander Brothers return to their storytelling roots with the new turbo-charged vampire crime thriller, “Girlfiend”, from Dark Horse Comics—now in bookstores nationally. A meaty 280-pages, the graphic novel represents their first major comic book work since “Batman: City of Light” in 2004 and fourth graphic novel in a career that includes ten series and 15 stand-alone issues for such major publishers as Marvel, DC Comics, Image and Dark Horse Comics.

Since its debut at the Emerald City ComiCon in Seattle last month, “Girlfiend” is being buzzed as their best work yet— quite a compliment considering their groundbreaking art in “Grendel: Devil’s Legacy”, terrifying “Exquisite Corpse” series and revolutionary epic “Triple X”.

During their hiatus from comics, the Pander Brothers have been making movies. “Selfless,” their 2009 psychological thriller about identity theft, premiered at the San Diego Comic-Con. Called “stylish, smart and compelling” by the Oregonian, the film took top honors, including “Best Feature” at the BendFilm Festival, and was nominated for the “Red Star” award sponsored by Heineken for “new visions” in filmmaking. Last fall, their 16-minute narrative, “Subtext,” told entirely through texting, debuted at the Palm Springs International ShortsFest. James Wegg of Rotten Tomatoes has written about “Subtext”: ‘The ever-inventive Pander Brothers have teamed up with cinematographer Kevin Pham, bringing to amusing life a love-triangle-in-progress employing text messages to drive the action and reaction towards a most indecent proposal.”

Rarely idle, Jacob and Arnold can usually be found working on multiple projects simultaneously— from directing and producing music videos and commercials to penning scripts and raising financing. They get their best ideas, they say, during road trips together between Oregon and LA.

GIRLFIEND will be on display throughout the month of May, with gallery hours on Mondays from 2pm-6pm, Saturdays from 11am-5pm, and by appointment. The exhibit will close at the end of business on Saturday, May 30th.