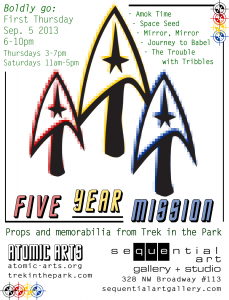 For the past five years the Atomic Arts theater company have delighted Portland audiences with Trek in the Park, their interpretation of classic Star Trek episodes. Matching the “five year mission” described in the television show’s opening, the troupe planned a five-year run. But what they didn’t plan on was the rather passionate response from Trek fans both local and international. Since that first year, Trek in the Park has moved their performances of classic episodes from Woodlawn Park to Cathedral Park to accommodate ever-growing crowds, played sold-out shows at the Bagdad Theater, and done a live voice-over performance to “Spectre of the Gun” with music by Federale. Trek in the Park has been featured on NPR, CBS, and provided a backdrop to a sketch on the show “Portlandia”. It has become one of the city’s most beloved summer past times.

“Five Year Mission” showcases the evolution of Trek in the Park’s set and prop design, from Vulcan weapons made of duct tape and jump rope to a full scale replica of the K-7 bar. The exhibition includes set pieces by property masters Steven Schmucker and Mike Estes, costumes by Marge Rosko, promotional artwork by Alex Fernandez, and various props by Charlie Babbage, Geahk Burchill, and Benja Barker. For the opening reception, many of the cast and crew will be in attendance in full costume. Plus, the Captain’s Chair will be stationed outside the gallery for photo opportunities with the cast.