Sequential Art Gallery presents “BEYOND BOILERPLATE”, a new exhibit by Inkpot Award–winning artist Paul Guinan. The exhibit opens this Thursday, November 7th, with the artist’s reception from 6pm to 10pm. 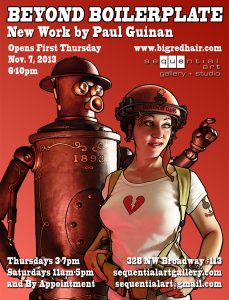 “Beyond Boilerplate” is an exhibition of selected works by Guinan, created since the publication of Boilerplate: History’s Mechanical Marvel. On display will be examples of Guinan’s digital art, as well as his pen-and-paper illustration. They showcase his love of working in varied styles and media.

The show will feature works Guinan has done with some of his favorite pop subjects, such as Batman, Star Trek, and Doctor Who. His most recent art depicting his Victorian robot character will also be displayed, including the first public showing of the original pen and brush art from his 24-hour comic book, The Last Mission of Boilerplate.

Guinan is a co-founder of Periscope Studio, the largest comic book studio in North America. He started out at First Comics in Chicago, retouching the first manga translation published in the U.S., Lone Wolf and Cub. While at First, Paul also co-created Cargonauts (a precursor to Firefly), and he later co-created the time travel series Chronos for DC Comics. With his wife, Anina Bennett, he created the groundbreaking science fiction comic Heartbreakers, now being reissued in digital form through ComiXology. Guinan’s innovative art for their graphic novel Heartbreakers Meet Boilerplate was nominated for an Eisner Award. 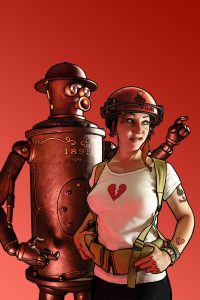